How to use .dockerignore and its importance 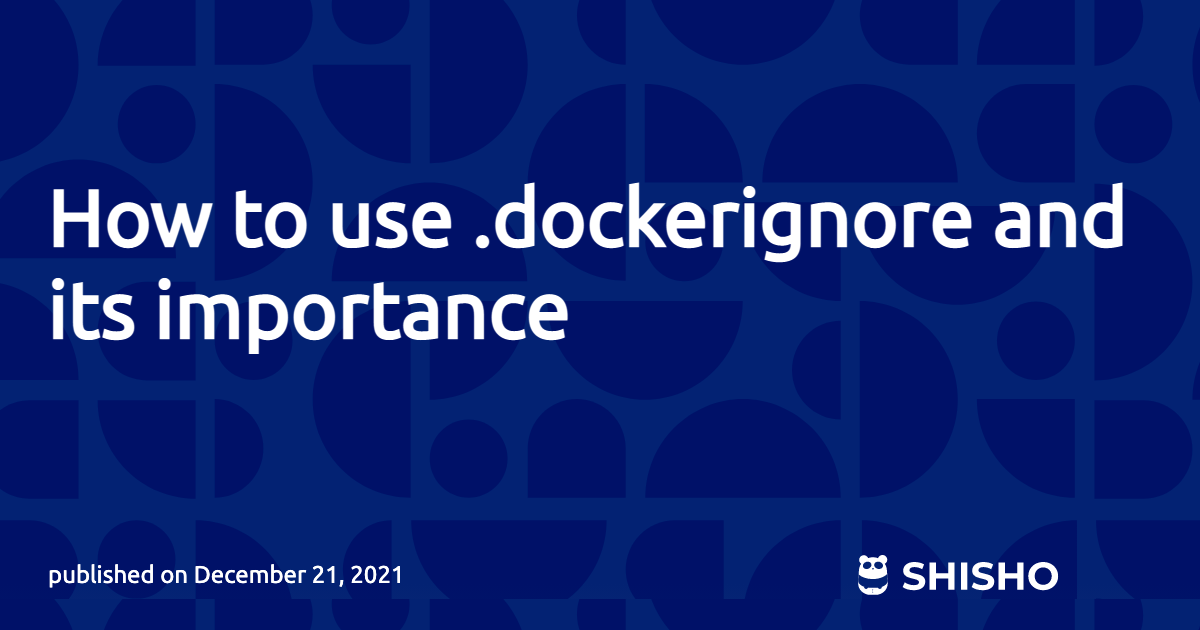 How to use .dockerignore and its importance

What is a .dockerignore file?

A .dockerignore is a configuration file that describes files and directories that you want to exclude when building a Docker image.

Benefits of using a .dockerignore file

The .dockerignore file is helpful to avoid inadvertently sending files or directories that are large or contain sensitive files to the daemon or avoid adding them to the image using the ADD or COPY commands. In the following, we will discuss specific benefits and use cases.

If you have frequently updated files (git history, test results, etc.) in your working directory, the cache will be regenerated every time you run Docker build. Therefore, if you include the directory with such files in the context, each build will take a lot of time. Consequently, you can prevent the cache from generating at build time by specifying .dockerignore.

This is a directory like .DS_Store, for example. These are unnecessary for creating Docker images, so you should add them.

By specifying files not to be included in the context in .dockerignore, the size of the image can be reduced. Reducing the size of the Docker image has the following advantages These benefits are important because the more instances of a service you have, such as microservices, the more opportunities you have to exchange Docker images.

In addition, it is recommended to add directories such as node_modules to .dockerignore because of their large file size.

In the past, there have been cases where credential information and source code, and passwords have been compromised by uploading to DockerHub.(Twitter, 2016)

Don't forget to exclude the .git directory at this point. If you have committed sensitive information in the past but have not erased it, it can cause serious problems. Git history is not required to be included in Docker images, so be sure to include it in your .dockerignore file.

How to create a .dockerignore file?

If you know how it works, you will understand how to create it. The .dockerignore file works by creating a file named .dockerignore in the build context root.

Note that the build context root here is the path used by docker build, not the location of the Dockerfile.

All you have to do is write the file's name you want to exclude from the Docker build context. This is roughly similar to the way you would write a .gitignore. Let's take a look at the detailed syntax below.

First, lines beginning with # will be interpreted as comments.

By using wildcards in the description, you can specify a target file regardless of which directory it is in. The following is an example of specifying a file named target in any directory one level below the build context root.

On the other hand, if you want to specify a specific file name, not just a file hierarchy, use **.

The following also excludes files whose names are extended by one character from target. For example, target1 and targetA are excluded.

If you want to exclude a specific file from the list of files specified with .dockerignore, use the ! exception character. The following is an example where files with .md extension are not included in the Docker image, but only README.md is included.

Syntax difference between .dockerignore and .gitignore

By the way, I explained that .dockerignore and .gitignore are similar, but there are some differences in syntax.

Suppose you have the following files in the current directory

For example, suppose you write the following in .gitignore:

In that case, files like the following will be ignored.

On the other hand, you can write the following in .dockerignore:

In this case, unlike .gitignore, only the following files will be ignored. In other words, you need to specify the directory in .dockerignore.

If you want to exclude files in other directories as in the .gitignore example, you can put the following in .dockerignore:

So, what kind of files and directories should you actually specify when writing the .dockerignore file? The following are some examples from projects using several languages.

In the case of Node.js projects, it is effective to exclude files such as node_modules and npm-debug.

Why is my .dockerignore not working?

You are likely specifying the file path incorrectly. For example, notations starting with /, such as /target are not supported.

The way to specify the file path in .dockerignore is based on the specification of the file path package in the go language; see the following page for details. https://pkg.go.dev/path/filepath#Match

Should I add node_modules to .dockerignore?

It would help if you did not confuse the node_modules on the Docker host with the node_modules in the container because, on macOS and Windows, Docker Desktop will bind-mount the code across OS walls. On macOS and Windows, Docker Desktop bind mounts code across OS barriers, which may cause problems where binaries installed with npm for the host OS cannot be executed on the container OS.

So far, we have described the advantages of using .dockerignore, its syntax, and its usage. I hope you now understand why the .dockerignore file is so important and why you should remember to write it.

The .dockerignore file is just as easy to specify as the .gitignore file, so don't forget to create it.